I thought we’d try something a little different around here and start a weekly post called Sunday Spotlight – Authors on Show.  A place to showcase some authors and see what book or books they have out all in one post! I may not have read the books posted, so please know that this is all about sharing the love and discovering new authors, together. Kicking off the inaugural Sunday post is…… 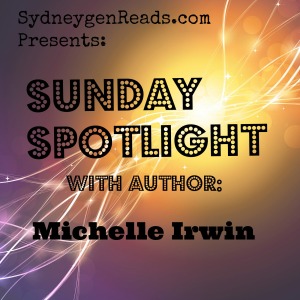 Michelle Irwin has been many things in her life: a hobbit taking a precious item to a fiery mountain; a young child stepping through the back of a wardrobe into another land; the last human stranded not-quite-alone in space three million years in the future; a young girl willing to fight for the love of a vampire; and a time-travelling madman in a box. She achieved all of these feats and many more through her voracious reading habit. Eventually, so much reading had to have an effect and the cast of characters inside her mind took over and spilled out onto the page.

Michelle lives in sunny Queensland in the land down under with her surprisingly patient husband and ever-intriguing daughter, carving out precious moments of writing and reading time around her accounts-based day job. A lover of love and overcoming the odds, she primarily writes paranormal and fantasy romance.

Through the Fire (Daughter of Fire)
Genre: Paranormal Romance/Urban Fantasy

Evie Meyers’ life is one spent on the run. Every minute of every day, her life is in danger if anyone should suspect the truth about her ancestry. Her father was willing to risk everything to keep the truth hidden, even from her, but the lies he fabricated were exposed when her high school crush, Clay Jacobs, inadvertently stumbled upon her secret. His discovery puts Evie at risk from a secret organization tasked with washing the world clean of nonhumans—and Clay is one of its deadliest soldiers. Forced into a war she doesn’t understand, all because of what she is, Evie is left with no choice but to flee with her father to escape persecution.

When Clay reappears in her life, battle scarred and mysterious, Evie is unprepared and terrified as he forces his way back into her heart. When the battle catches up with her, and a tragic accident tears apart the peace she discovered, she finds herself alone and without the protection of her father, or her lover. Now, she needs to keep her secrets hidden and learn to survive on her own in a world that wants her dead, all while searching for the missing piece of her heart.

*link to my review 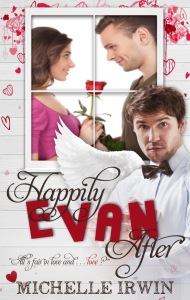 Happily Evan After (Fall for You #1)
Genre: Romantic Comedy.

Evan is a reluctant cupid.

Facing an unknown term of servitude to repay his debt to the world, it is his responsibility to guide couples together. Despite initial hesitancy, he has learned to handle every case with care and he now basks in the afterglow of new-found love and

relishes in the energy it provides him. But his end goal is still the promise of paradise in return for his penance. 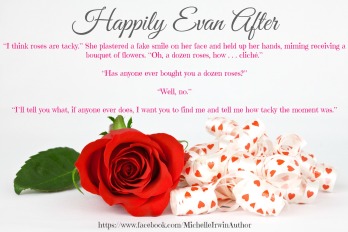 It’s all going according to plan until he receives an assignment that is inconceivable to him. He has to find a mate for Becca, within whom lives the reincarnated soul of his one true love. Bound by his duty to find her a match, he must resist her charm and suppress his own desires. It is his job and he cannot fail, even if his own paradise now seems lost.

For a cupid, falling in love is against the rules.

Clay Jacobs is a soldier. His family—elite members of a secret organization—are tasked with washing the world clean of all supernatural threats. Each new day brings the opportunity to fight at their side for a cause that he’s never doubted is just.‏

But Clay harbors a dangerous secret. The object of his teenage obsession was not human, and he failed to detect the truth until it was too late to destroy her. Even after she fled, he couldn’t bring himself to report her. Now, the memory of the one who got away not only haunts him, it holds him captive and assaults him nightly. Unable to escape her hold on his mind, he races across the country to locate her and restore his sanity. Only instead of the monster he expects, he finds a woman who ensnares him with her charms. In her embrace, Clay dares to imagine a different life.

When his family discovers his betrayal, and threaten to destroy his dreams in the worst way imaginable, Clay has no option but to return to their side and convince them he’s back on the right track. Will he be able to play his part convincingly when the cause he’s spent most of his life fighting for is the very thing that will end his lover’s life?

Each week the authors will answer the same questions..it’s what I like to call a Sunday Quickie!

1. How would you describe the writing to publishing process? Any fun analogies?
I don’t know about fun analogies, but the best description is different to what I expected but somehow exactly what I expected. Actually, I have an analogy but not sure if it’s “fun.” Writing to publishing is like having a baby (stay with me):
Step 1 is the learning how-to – this is the sex ed part of writing. You don’t have to do it, but you know a hell of a lot more if you do.
Step 2 is the fun part 😉 – the actual sitting and writing. This can be painful, can be brilliant. You sometimes do it when you’re not in the mood but when you are right into it everything is just flowing (*snorts* unintended pun, but leaving it there for comedic value)
Step 3 is the editing – this is a bit like antenatal classes and labor all rolled into one. It’s also sometimes painful, but it’s necessary. It helps you to understand what is happening a little better. It is where things go from being a theoretical maybe in the future to the “holy crap this is happening right now.”
Step 4 is bringing the baby home and showing it off. There’s a certain amount of trepidation of have you done everything you can to make the baby (book) the best it can be. You worry when it goes off to meet friends and strangers. You are left just hoping that you’ve done what you can do to make sure it has every possible success but ultimately it’s out of your hands.

2. Are you a plotter or a fly by the seat of your pants type writer?
I usually start out with an idea and a very loose plot. I don’t sit and plot that out further. I spend the time getting to know the characters instead. Usually when I sit to write, they look at my loose plot points, laugh, and then wander off to do their own thing. So I guess that makes me a pantser.

3. Do you listen to music or are you a silence in the library writer?
“Who turned out the lights?” Sorry, whovian joke 😉 To answer the question: music. Always. I’m the sort of person who can’t sit in a silent room without getting an irresistible urge to chuckle, which was obviously not great for exams. The right song at the right time though can get things moving in unimaginable directions. My first proper writing session after I’ve allowed myself to concede that yes this idea is going to be a book, is usually spent setting up a playlist.

4. You’re going to a deserted island and you’re allowed 3 books to read for the rest of your life… which books and why?
I always cheat when this is asked, because one choice would be my Lord of the Rings book, which is actually all 3 of the LoTRs books in one deliciously bound book. I can read this over and over again so it’s a must. The 2nd would probably be Red Dwarf omnibus, again a great book that is actually three books all in one. And lastly hmmm it’s a hard choice, but probably the complete works of William Shakespeare. I love his plays and really between those books I’ll have hours & hours of reading before I have to repeat 😉

Thank you so much for answering my questions and letting us get to know you a little better!
If you’d like to connect with the author check out the following links:
Author Website
Facebook Author page
Amazon
TSU
Goodreads
Twitter
Blog
Pinterest: @writeonshell
Tumblr: @writeonshell
Instagram: @writeonshell
I hope you have enjoyed this Sunday Spotlight.  Look out for every Sunday for a new author to discover.  Read On!