You might remember I had the pleasure of reviewing the new release, Cutting Out by Meredith Shayne. A story about sheep shearing in New Zealand, and finding love when the world seems to be against you.

I have the honour of hosting a spot on the blog tour this month and got to ask the author some questions. Check out the interview below.

In Cutting Out you’ve created such a great atmosphere surrounding the shearing stations and camaraderie amongst the crews, what type of research did that entail?

Thank you, I’m glad to hear you think that! I’m a bit of a reality TV nut, and there’s a TV show that plays here called Shearing Gang (an episode can be found here: https://www.youtube.com/watch?v=1W4vkoDA5BI), which I watch and love. It’s a bit of a warts-and-all kind of show, very Kiwi in the way the subject is treated. The original idea for the setting came from that, but a lot of the way the Kiwis are with Shane, all the teasing about him being Australian, etc, came from my own real life. That’s just the way Kiwis are with us Aussies, bro! J

Was there any particular inspiration for the characters of Lachie and Shane?

Not really. When I decided to set the story in New Zealand I knew that I wanted a Maori presence in it, particularly since there’s a high proportion of Maoris in shearing. I also wanted one of the main characters to be Australian—it seems I’m incapable of writing a story without an Aussie in it, and in fact there ended up being two in there, so there you go! But apart from deciding on some general characteristics, once I’ve started thinking about a story the characters tend to pop into my head pretty much fully formed, and seemingly from out of nowhere. I wasn’t necessarily intending on making the second main character Maori, but then Lachie showed up and that was it.

Do you have a particular process of writing? From start – to – finish, or ending first?

I’m not a planner, so I never have an outline. I generally know how I want it to start and end, and a few things that happen in between, but that’s it. Things to add in come to me as I’m writing. I tend to start at the beginning, but then there’ll come a point where I start skipping around writing scenes out of sequence. Then I have to go back and stitch them all together. I wish I didn’t do things that way, but it’s happened during the writing of every one of my books so far, so that’s clearly my process! It’s a good way to avoid writers block though, I have to say.

Do you have any advice for people who would really like to get into the MM genre, but don’t know how to?

That is a really good question. I think to someone who’s never written before I would say: the only way to do it is to jump in, publishing a book has never been more achievable than it is now. Read a lot in the genre, decide what you do and don’t like in a story, then write the one that’s in your heart. Be prepared for writing to be harder than you ever expected. Find a writing process that works for you, and don’t worry if it’s different to everyone else’s, it can’t be wrong if it works for you. Put one word in front of the other however you can until you’re finished, then give it to someone—preferably at least two someones—you can trust to tell you the truth about it. Listen to them, but remember it’s your book, not theirs. Once it’s done, decide which publisher to send it to very, very carefully. Seek as much advice as you can about that from published M/M authors, because after you’ve signed on the dotted line is too late to find out you’ve made a mistake. Once it’s out in the world, let it go—some people are going to love it, but some people are going to hate it, and there’s nothing you can do about that. Holding a paperback book that you wrote in your hands will never get old, and all the blood, sweat and tears you’ve shed along the way will be worth it every time someone emails you to tell you how much they adored your book.

Will we get another book, perhaps Zach *grins*?!?!

Haha! Possibly. I don’t ever really plan sequels but if there’s one character who deserves to be completely knocked on his arse by love, it’s Zach Harris. And I did like writing in that setting, so… he might get lucky. J

Are there any parts to the book that you edited out, that you think would have been good, or that you could share?!

Actually, there’s not! I don’t tend to cut big chunks out when I edit, if they need to be changed I rewrite them instead, so I don’t have a little pile of deleted scenes to share. Occasionally I do write missing scenes or alternate point-of-view scenes after a book has been published which I usually make available for free, but I haven’t done that for Cutting Out as yet! Sorry. 😉

What’s your favourite genre to read?

I mainly read M/M these days, and I’m a pretty wide-ranging reader within that but funnily enough, because I hardly ever write it, if I was to pin down a subgenre I would say that I really like to read paranormals. That carries over into mainstream fiction as well, because I love a good urban fantasy, and paranormal romance. I mainlined the entire Kate Daniels series by Ilona Andrews last year, and they almost killed me, but in the absolute best of ways.

Blog Tour Giveaway
Click on the Image to Enter 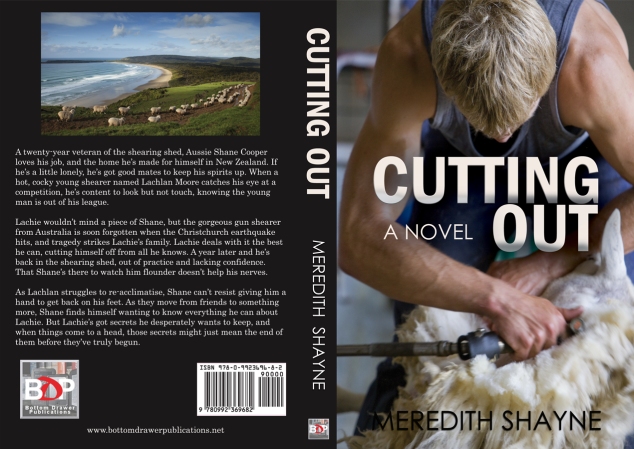 About the Author: A scientist in a past life, these days Meredith Shayne mainly uses her scientific training to poke holes in television pseudoscience. Originally from Australia, she moved to New Zealand to start a new life a few years ago and hasn’t regretted it for one minute, even if she frequently wishes that the New Zealand weather was a little better; if she’s forced, she’ll admit that the refreshing lack of animals that can kill you in New Zealand makes up for a little rain. Meredith travels a lot, so much so that she has developed a shameful love of airplane food and knows her passport number by heart. When she is at home, she enjoys baking, horrible music from the 1980s, reality television, and gloating any time Australia thrashes the living daylights out of New Zealand on the sporting field. Find Meredith at her website: http://www.meredithshayne.com   : Twitter  : Goodreads : Booklikes

Cutting Out is proudly bought to you by

A twenty-year veteran of the shearing shed, Aussie Shane Cooper loves his job, and the home he’s made for himself in New Zealand. If he’s a little lonely, he’s got good mates to keep his spirits up. When a hot, cocky young shearer named Lachlan Moore catches his eye at a competition, he’s content to look but not touch, knowing the young man is out of his league.

Lachie wouldn’t mind a piece of Shane, but the gorgeous gun shearer from Australia is soon forgotten when the Christchurch earthquake hits, and tragedy strikes Lachie’s family. Lachie deals with it the best he can, cutting himself off from all he knows. A year later and he’s back in the shearing shed, out of practice and lacking confidence. That Shane’s there to watch him flounder doesn’t help his nerves.

As Lachlan struggles to re-acclimatise, Shane can’t resist giving him a hand to get back on his feet. As they move from friends to something more, Shane finds himself wanting to know everything he can about Lachie. But Lachie’s got secrets he desperately wants to keep, and when things come to a head, those secrets might just mean the end of them before they’ve truly begun.

This novel, about sheep shearers in picturesque New Zealand, was an entertaining read. The author used a wonderful voice to portray both main characters, and the emotion came through on the pages. The story line weaves in the world of shearing in a way that makes you feel like you can smell, and hear the hustle and bustle of the shearing shed. I really enjoyed the camaraderie around the gangs that work together, and the portrayal of bonds formed in the roughest of conditions. The integration of slang was enjoyable, and make me chuckle a few times.     The main characters, Shane and Lachie were wonderfully written, and the author did a really great job of making me feel every emotion available. At times I had to take a moment to relish the fact that I was frowning, or smiling, or having my heart crushed at the devastation that the Christchurch earthquakes had on families. In my humble opinion, when an author can make a reader feel that, they really have a gift. Read this book if you’re after a love story between characters that push and pull, and create a slow burn. Cutting Out is a wonderfully portrayed romance novel, with blokes and beer, instead of wine and flowers.

About the Author: A scientist in a past life, these days Meredith Shayne mainly uses her scientific training to poke holes in television pseudoscience. Originally from Australia, she moved to New Zealand to start a new life a few years ago and hasn’t regretted it for one minute, even if she frequently wishes that the New Zealand weather was a little better; if she’s forced, she’ll admit that the refreshing lack of animals that can kill you in New Zealand makes up for a little rain. Meredith travels a lot, so much so that she has developed a shameful love of airplane food and knows her passport number by heart. When she is at home, she enjoys baking, horrible music from the 1980s, reality television, and gloating any time Australia thrashes the living daylights out of New Zealand on the sporting field. Find Meredith at her website: http://www.meredithshayne.com   : Twitter  : Goodreads : Booklikes

*I received this book as an ARC from the publisher. All reviews expressed are solely mine.