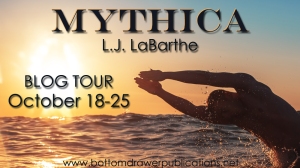 Hi and thanks for having me on your blog! I hope readers enjoy “Mythica.”

Inneston is a ruin now, and those ruins feature in the last quarter of “Mythica.” The ruins are in the Innes National Park, which is a gorgeous place at the very bottom of the Yorke

Peninsula. The town itself was a thriving place when it was settled and built in 1913. Until 1930, it was a bustling mining town, and the product that was mined was gypsum. Now, it stands by the sea, half of it ruined, the other half slowly being restored by the Friends of Inneston.

On the beach, there are the scattered remains of mining tools, rusting away, old hunks left as reminders of the trade that once was worked here. Inneston itself had shops, houses, a pub—the essentials of life—and some of those buildings have been carefully restored and are now holiday accommodation for visitors to the National Park. Now, you can stay in the old Manager’s Lodge, the Engineers Lodge, Norfolk Lodge, the Miners Lodge, 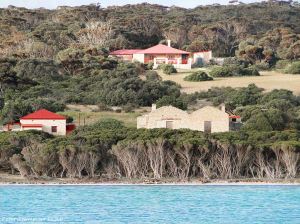 Mallee Lodge, Gatehouse Lodge and the old Post Office. Each building retains its historical exterior and interior and some of them don’t have electricity or kitchen facilities inside them—they have a communal area for cooking, bathing and bathroom.

Inneston is a picturesque spot in the park, surrounded by scrub and trees, facing the open water, and the park is home to a huge variety of wildlife and plants. It’s a gorgeous spot to visit, especially in late spring or late summer, as the full summer here does get extremely hot. Winter is wet, windy and cold, so not a great time to visit unless you want to stay indoors all the time. Because of the history of the area and its connection to the tourism of the whole of Yorke Peninsula, I wanted to include it in “Mythica,” no matter how peripherally, and then as I wrote, it became obvious to me that it would be a perfect location for a scene.

The photos don’t really do it justice, I think—it’s just a stunning, gorgeous place, and a terrific holiday destination… and book location!

Click on the above image to enter the GIVEAWAY

Caiden Jones is part-selkie and lives an idyllic life by the sea in South Australia. He’s had his fair share of disappointments, like being kept out of the Navy due to his mythica status, but overall he’s got a pretty good life. Until he’s in the wrong place at the right time.

Cai steps in to subdue an out-of-control minotaur and in the process suffers a serious injury to his ribs. As Cai struggles to breathe, a gorgeous suit-clad sy’lph with mesmerising blue eyes races to his rescue. When it’s learned that the minotaur was poisoned, the sy’lph, Gray, makes it his personal mission to keep Cai and his family safe.

Cai has always harboured some resentment towards the sy’lph because of their easy acceptance into the community, so the attraction he feels for Gray takes him by surprise. But how can they find out what this might mean when the lives of Cai and his family are endangered by someone closer than they realise?

L.J. LaBarthe is a French-Australian woman, who was born during the Witching Hour, just

after midnight. From this auspicious beginning, she went on to write a prize-winning short story about Humpty Dumpty wearing an Aussie hat complete with corks dangling from it when she was six years old. From there, she wrote for her high school yearbook, her university newspaper, and, from her early teens to her twenties, produced a fanzine about the local punk rock music scene. She loves music of all kinds and was once a classical pianist; she loves languages and speaks French and English and a teeny-tiny smattering of Mandarin Chinese, which she hopes to relearn properly very soon. She enjoys TV, film, travel, cooking, eating out, abandoned places, urbex, history, and researching.

L.J. lives in the city of Adelaide, and is owned by her cat.

Follow the Blog Tour by clicking on this image:

Thanks for stopping by! ~Gen

One thought on “Blog Tour – Mythica by L.J. LaBarthe”